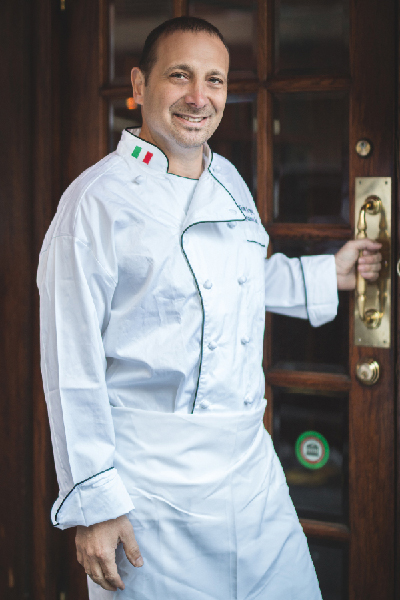 Dino was raised in Puglia, an idyllic corner of southern Italy, where respect, traditions and large family gatherings are an important part of everyday life. With his mother, grandmother and many aunts, Dino spent countless hours in the kitchen where the love for family blends with the passion for food. He learned to value each ingredient, how they complement one another, and respect generations long experience in an authentic countryside setting.

Having relocated permanently to New York in the late 1970s, Dino’s culinary training began officially in 1978 at the young age of 14, when his father, Raffaele, opened his first restaurant, “La Tavernetta”, located in the south shore of Long Island. There, Dino learned all about work ethic and basic culinary skills.

In 1980, Dino’s father opened his first restaurant in Manhattan, “Lello”, which received a two star review from Mimi Sheraton of the New York Times, followed by “Scarlatti" 4 years later. This gave Dino the opportunity to evolve and learn the intricacies of food preparation and execution under the tutelage of very talented and experienced chefs. It was at this moment that Dino discovered his culinary passion and identity. He honed his skills and creativity in classical Italian dishes. However, to succeed in the restaurant business, it was imperative that he learn the management side of the restaurant business too. Dino began waiting tables and eventually graduated to Maitre`d/manager.

The hands on experience as well as his father’s mentoring proved invaluable. Finally, at the age of 29, Dino was eager to launch his own restaurant. In 1994, “Cellini” opened its doors. Over twenty years later, Cellini continues to serve traditional Italian comfort food and has become a staple in midtown Manhattan with a long list of high profile and loyal customers.